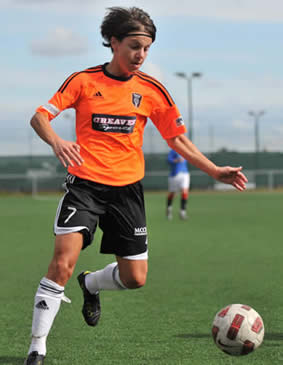 right before the men's cup final in the Olympic Stadium in Berlin; towards the end of the game    the stadium was almost full and we were playing in front of 80,000 people - that was quite    memorable.

Worst moment in football?
Losing the cup final to Hibs last year was definitely one of them.

Most difficult opponent?
The best defender I have played against since I came to Scotland is probably Julie Smith of Kilmarnock; other than that, I didn't really enjoy Kelly Smith running circles around me when I played against her in the U.S. a few years ago….neither did my teammate Cindy who thought that breaking her leg by an outragous tackle near the midfield line would solve the problem....thankfully Kelly recovered, however she did miss the European Championships 2005 in England!

Best goal scored?
Scoring the 'sudden-death' winner after 147 (!!!!) minutes playing for the University of Hartford against the University of Virginia to get us into quarter finals of the National play-offs; the Americans think it's a great idea to add an additional 2 x 15 mins overtime if the game isn't decided after the 'first' 2 x 15 mins overtime! That was the first and only time my University has ever made it that far in the play-offs.

One player you're glad to have in your team and why?
Jayne Sommerville - definitely wouldn't want her to be on the opposing team now that I'm playing up front…ha!

Favourite player?
I used to be a big fan of Jurgen Klinsman and quite like Cesc Fabregas now.

Current male player you are most like and why?
I am probably most like Nakamura because he can’t tackle or head the ball either.

Football ambitions?
I definitely want to win the league with City this year.

T.V show you don't miss?
Currently I miss them all because I'm training every day of the week….thanks Kate

One fact about you that no one knows?

I won a Youth Music Competition for playing the Cello when I was 13….