Glasgow City are delighted to announce the capture of Rangers Captain Lesley McMaster from their Glasgow rivals. 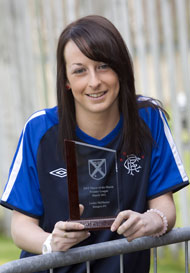 The 20 year old defender becomes Head Coach Eddie Wolecki Black's fifth pre-season signing as he strengthens his squad ahead of the defence of the Premier League Championship which kicks off in just over one month's time. He said, "Once we became aware of Lesley's availability then it was an easy decision to pursue her signature. This is not the first time we have been linked with Lesley and I am happy that this time she has decided to sign for the club. She has shown tremendous loyalty to Rangers who have to take great credit for her development over the past few years. There is no doubt she has the calibre to play for this club and at 20 years of age is another player who can give us many years of continuity. First though we need to get her back to full fitness. For the time being she will be in the hands of the medical staff.

"I know many people will ask where will this one play and where will that one play, my answer is it’s a very long season and we will play many games, we as a club know the depth of squad required to challenge on all fronts. I think people forget we have lost 5 players from last season’s squad and the signing of Lesley makes it 5 in. I believe new signings give the whole club a lift and our current players know we have to keep a strong squad. We have a more mature squad with a great balance of experience, good attitude and youth.”

Commenting on her move, McMaster said, “I am delighted to be coming on board at City after many years at Rangers and I am looking forward to a new challenge as well as improving myself as a player. I appreciate this opportunity and I am excited about my future and I am sure I will gain plenty experience playing with the top players in the country.”

You can see Glasgow City in action at their next home game in a challenge match against English Champions and one of the giants of the women’s game, Arsenal on the 19th February.