City put in a strong performance but bow out to Arsenal

A valiant effort by Glasgow City resulted in a narrow defeat to Arsenal in a five goal thriller in the Champions League last 16 encounter at Petershill Park in a match sponsored by Maritime Craft Services. The London club clinched the tie 6-2 on aggregate.

The Scottish Champions got off to a dream start. Slack Arsenal defending gifted the home side a corner and they took full advantage. Jess Fishlock delivered a near post cross that was met superbly by Lappin who bulleted a header past keeper, Emma Byrne, into the net to send the capacity home crowd into raptures.

Arsenal hit back after 12 minutes when Rachel Yankey finished a superb solo run with a stunning 25 yard shot that left City keeper, Lee Alexander, stretching in vain. The England international showed exactly why she has over 100 caps for her country.

The goal settled the visitors and they began to control and dictate play but they struggled to carve out many clear-cut opportunities as the City defence remained resolute and compact.

After 26 minutes Lappin capitalised on careless Arsenal defending and threaded a neat pass through to Denise O’Sullivan, but her scuffed right-foot shot was comfortably gathered by keeper Byrne.

As the first half progressed, City grew into the game, but they struggled to create chances. They were restricted to long distance speculative drives, and Fishlock and Murray both tested the Arsenal keeper.

Arsenal had a chance to take the lead after 32 minutes but an unmarked Gilly Flaherty glanced her header just wide of the post, much to the relief of the large home support.

A swirling wind was making life difficult for both sides and the second half began as the first had ended – with very few chances. Arsenal almost took the lead after 54 minutes when a powerful run sent Ellen White through on goal, but her effort was superbly tipped onto the woodwork by Alexander. From the resulting corner, a last-gasp City clearance denied the English side.

Arsenal eventually took the lead when Jordon Nobbs managed to slide in and knock the ball past Alexander and into the corner of the net. The goal effectively killed the tie, but the match was still a competitive contest.

It was nearly 3-1 after 76 minutes when substitute and veteran striker, Kelly Smith, raced in on goal, but her left-foot strike was well saved by Alexander once again.

With 11 minutes left to play City equalised. A superbly floated free-kick by player of the match, Jess Fishlock, was met by unmarked captain, Rachel Corsie, who directed her header past the Arsenal keeper.

The equaliser appeared to reinvigorate City and they almost took the lead after 87 minutes. Substitute, Lisa Robertson, who had moments earlier flashed a shot wide, had a fierce drive turned round the post by the Arsenal number one.

In the last minute of time added on, the London club inflicted a killer blow to finally sink City. Good work down the left by Scottish internationalist, Kim Little, enabled Alex Scott to lash home the winning goal. This was a cruel blow for the Glasgow side which had given its all and come within moments of holding the mighty Arsenal to what would have been a creditable draw. 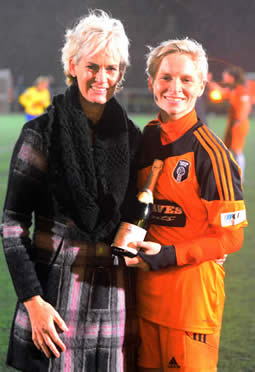 Despite elimination, City will have relished this tie against the Londoners. They can take confidence from a respectable showing over the two legs. The gap between the two clubs is real, but it’s not a gap that can’t be closed in the future.

Commenting on the match, City Head Coach, Eddie Wolecki Black said, “Tonight football showed it can be a cruel game. We started the game really well and the early goal gave us confidence to continue to push forward. It was very disappointing to lose an equalising goal so early after scoring. I didn't think the second half could be played at the same tempo however it is great credit to the players that they maintained such a high standard. We showed great character to come back at 2-2 and just when I thought we would maybe win the game we lost it with virtually the last kick of the ball.  I believe we deserved much more than the result gave us. I wish Arsenal the best of luck in the next round. We have to take the positives out the game and look to bounce back on Sunday and I can't think of a better game to play after this than a Cup Final. I hope the supporters turn out in numbers again as they were magnificent tonight. I also have to praise the officials who allowed the game to flow despite the physical nature of the match. It was competitive but played in sporting manner.”

Glasgow City’s next and final match of the season is this Sunday at Broadwood Stadium in the Scottish Cup Final. City take on Hibernian and kick off is 3pm. It is a cash gate, so all spectators can pay on arrival. A win for City, secures the domestic treble.

If you would like to watch Glasgow City next season, (2014 season = March to November) how about purchasing a Season Ticket, the most affordableway to follow Scotland’s top team. Season Tickets are priced £40 Adults, £25 Concessions and Kids go Free for all domestic matches. You can purchase on our website by clicking here http://glasgowcityladiesfc.co.uk/Purchase2014GlasgowCitySeasonTickets.htm