Glasgow City started preparations today in the first of two training sessions as they gear up to take on Mosta, the Champions of Malta tomorrow in their second match of Group Five in the UEFA Women’s Champions League. 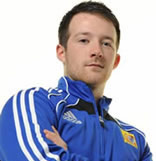 Having defeated professional side Spartak Jaffa of Serbia on Thursday, City are strong favourites to dispose of their Group’s bottom seeded opponents in the 2pm GMT kick off at the Gradski Stadium, Subotica, Serbia.

Although expected to win, City Assistant Coach, Donald Jennow, knows it will not be an easy match, especially with the heat. He said, “We saw Mosta play yesterday and they are a very defensive team. They play five at the back and we expect them to play even deeper against us than they did against the Faroe side, Klaskvik, when they lost 1-0. We will also be playing in the full heat of the day, which is a concern for us. Our match yesterday was at 5.30pm local time, and the girls still struggled with the temperatures in the first half, so it will be challenging tomorrow. However, they will be well hydrated and hopefully all will go well. We are certainly fully focused and prepared for the task ahead.”