Glasgow City moved 12 points clear at the top of the SWPL after a 2-0 win over second placed Celtic at Barrowfield tonight. 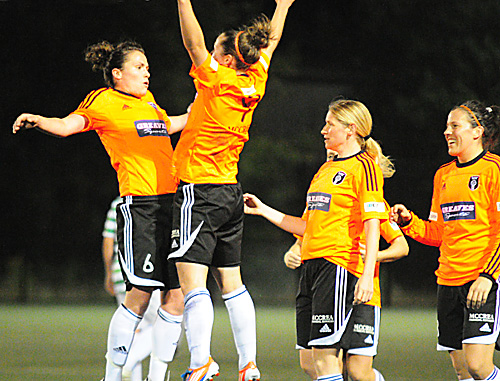 From the first whistle City controlled the match with Leanne Ross, Emma Mitchell, Eilish McSorley, Jo Love and Ruesha Littlejohn all having attempts at goal in the opening 25 minutes. McSorley went closest with a header which sneaked just past the post after a City corner and then Mitchell had a great chance to open the scoring, only to be denied by a great save by Celtic and Scotland number 1 Gemma Fay.

Rachel Corsie headed wide from another City corner and Celtic's Rhonda Jones made an excellent block from McSorley as she tried to find the back of the net from yet another corner set piece. However, on 41 minutes City finally made the breakthrough when Emma Mitchell hit an outstanding left foot drive across goal from 25 yards to give City the lead their dominance arguably deserved.

In the second half, Emma Mitchell doubled City’s advantage with yet another vintage strike, this time with her right foot, leaving Fay with no chance from 25 yards once more. 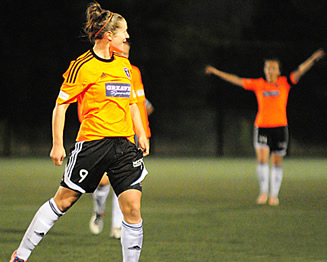 Celtic had their first shot of the match on 62 minutes which was wide of target and then recorded their first attempt on goal on 75 minutes as Celtic striker Heather Richards shot was well saved by Claire Johnstone in the City nets.

As Celtic began to push for a goal, more opportunities opened up for City, but the score remained 2-0 as Fay produced 2 more excellent one on one saves first to deny Leanne Ross and then Jane Ross when both were through on goal.

Commenting on the match, City Head Coach Eddie Wolecki Black said, “This was far from a great performance from us, but we controlled the match and dug out the result we required. We have now played second top of the table teams 4 times, and on each occasion we have emerged with 3 points which is great credit to this group of players. To be 12 points clear with 6 games remaining is an excellent position, but we focus on the next match only. Emma Mitchell’s goals were really top drawer and she is in great scoring form right now. Sometimes you need to grind out a result and we did that tonight. I am delighted for the players.” 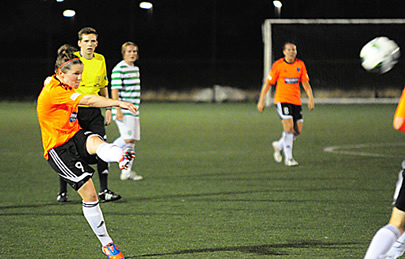 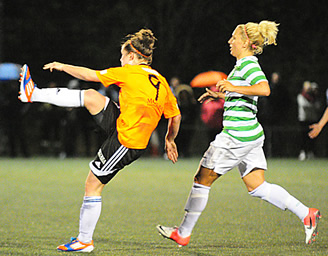 Bottom pictures of Emma Mitchell scoring both goals. Top pictures - Emma celebrates with her team mates. Pictures with thanks to Graeme Berry.