Glasgow City remain top of the SWPL following an 8-1 home win over Rangers at Petershill Park.

It took City fifteen minutes until they opened the scoring, but its quality was worth the wait. Leanne Ross played in Christie Murray down the side of the penalty area and the pint sized striker brilliantly turned her marker with an overhead kick before setting up Kat Lindner at the penalty spot who hit a fine strike first time into the back of the net.

Murray once again showed her brilliance two minutes later when she cleverly back heeled at the edge of the box to find the run of full back Emma Fernon who hit a composed finish into the keeper’s bottom left hand corner.

Half way through the first period Rangers had their first venture forward with intent, but Laura Williamson in the City goals thwarted the chance at the edge of the box.

On 26 minutes, City were 3-0 up with Fernon hitting an unstoppable shot into the top corner after a pass from Leanne Ross.

Two minutes later, City were denied a stonewall penalty when Murray was tripped in the box. However, as she managed to keep her feet, the referee played advantage which came to nothing, and to City’s dismay he never re-called the initial free kick inside the box.

Just after the half hour a low cross from Murray found Lisa Evans and the Scotland Under 19 and City striker will be disappointed with her tame finish which went into the arms of Khym Ramsay in the Rangers goals.

Murray was soon at the heart of things again receiving a throw in from Emma Mitchell before she unleashed a superb 28 yard drive which cannoned off the cross bar.

Evans, who was causing havoc with her pace, almost made it 4-0 before the break as she rounded two Rangers players, but Ramsay saved well at the striker’s feet.

At the start of the second period City continued to dominate the match, but were struck a blow when Rangers pulled a goal back through Lucy Clark. Some slack City play saw Rangers intercept the ball and play a long pass forward for Clark, who hit the ball from the edge of the box over Williamson and into the City net.

City however restored their goal advantage moments later with full back Emma Fernon getting her first ever hat-trick for the club. A through ball from Murray played Fernon in down the right hand side and the City player hit an inch perfect low drive into the far bottom corner of the net for a brilliant individual strike.

Murray almost got goal number five after being played in by Evans but a great saving tackle from Linzie Bayne played it out for a corner.

On the 65 minute mark, City did however make it 5-1 when Evans slotted neatly into the corner after being set up by Leanne Ross.

Three minutes later it was 6-1 when Murray hit an outstanding free kick from 40 yards into the back of the visitors net leaving Ramsay helpless. 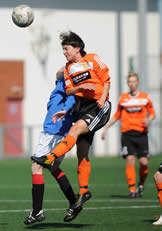 City had another free kick soon after with Clare Gemmell this time trying her luck, but she drove her effort into the wall. Leanne Ross then nearly scored a wonder goal as she tried to lob Ramsay from distance but her effort went over the bar.

With ten minutes remaining City were awarded a penalty when Murray was bundled over in the box. Up stepped Leanne Ross to score from the spot.

With ten minutes remaining Rangers got a chance to pull a goal back as Alana Marshall raced clear, but Williamson saved well.

Commenting on the victory, Head Coach Eddie Wolecki Black said, “We are delighted with the win. We scored a variety of goals which was great and we are happy with our performance as Rangers certainly made us work for our chances.”